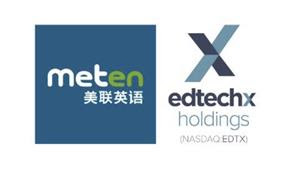 The combined entity will operate as Meten EdtechX Education Group Ltd. (“Meten EdtechX”) and will continue to focus on providing English language and future skills training for Chinese students and professionals.

In connection with the closing of the merger transaction, EdtechX and Meten completed the private placement of US$ 36 million from institutional investors including Azimut (AZM.MI), a leading Italian asset manager with assets under management of more than US$ 60 billion, and Xiamen ITG Holding Group, a Fortune Global 500 Company engaged in range of industries across China including education. These investments add to the previous investments into Meten by China International Capital Corporation (CICC, 3908.HK) and private equity funds affiliated with Tsinghua University. The transaction is expected to accelerate the expansion of Meten’s ELT offering and its fast-growing digital platform, ‘Likeshuo’, as well as fund potential synergistic and accretive acquisitions in China and internationally.

“We believe that the closing of these simultaneous transactions during these unprecedented market conditions is a significant achievement. It is testament to the strong fundamentals of the Chinese ELT market, characterized by rapid growth in demand for practical English language learning, and the robust expansion strategy pursued by Meten EdtechX which leverages an efficient omnichannel business model and technology to deliver profitable growth.”

“While the current COVID-19 pandemic continues to affect global economies, it has also created the conditions for accelerated adoption of online education and training globally. This is a trend we expect to continue in the long term”.

“The closing of this merger marks a significant milestone for Meten, an achievement made possible through the support of investors across the world and the dedication of management teams on both sides of the transaction. We look forward to working with Benjamin and Charles to deliver our growth strategy, taking full advantage of the extensive industry experience of our new board directors and the additional funding raised in connection with the transaction.”

Meten EdtechX’s ordinary shares will trade on the Nasdaq stock exchange under the symbol METX. Benjamin Vedrenne-Cloquet and Charles McIntyre have joined the Board of Meten EdtechX as independent directors to support Meten’s founders and management team with international investor relations and the implementation of their acquisition and digital expansion strategy.

Meten benefits from a highly efficient business model, which leverages the synergies between its nationwide network of 149 learning centres and sophisticated digital platform, Likeshuo, to deliver profitable growth.

Meten is well positioned to leverage China’s rapid growth in demand for education and training services, driven by the country’s continuous economic development and increasing urbanization. A growth strategy focused on further developing the online offering, expanding the offline network into tier two, three and four cities, and further enhancing and diversifying the service offering, is expected to deliver approximately 50% growth in revenue, 109% in adjusted EBITDA and 203% in adjusted net income by 2021.

EdtechX Holdings Acquisition Corp., headquartered in London UK, is public acquisition company sponsored by affiliates of a specialist “edtech” investment bank, IBIS Capital, and Azimut Enterprises, a Milan based global asset management firm with approximately $61 billion in AUM. EdtechX listed on Nasdaq on October 2018 with an initial capital raise of $63.5M and announced the acquisition of Meten in December 2019 for a stock consideration of $535M. EdtechX is led by French Chief Executive Officer, Benjamin Vedrenne-Cloquet, and British Chairman, Charles McIntyre. Benjamin and Charles are long standing business partners and have built businesses in the edtech, media and financial services sectors. Together, they lead IBIS Capital, a leading specialist education and edtech focused investment bank whose advisory arm was involved in the acquisition of Wall Street English China in 2018. In 2013, Charles and Benjamin also co-founded EdtechX Global, a world leading conference and insight network across Europe, Asia and China, gathering over 10,000 companies and 2000 industry leaders, innovators and influencers in the education, training and edtech industries. In addition, Charles McIntyre is Chairman of Learnlight, a leading English tutoring digital platform for corporates. Benjamin Vedrenne-Cloquet is also Chairman of the Board of CFBL (a French English Bilingual College in London).